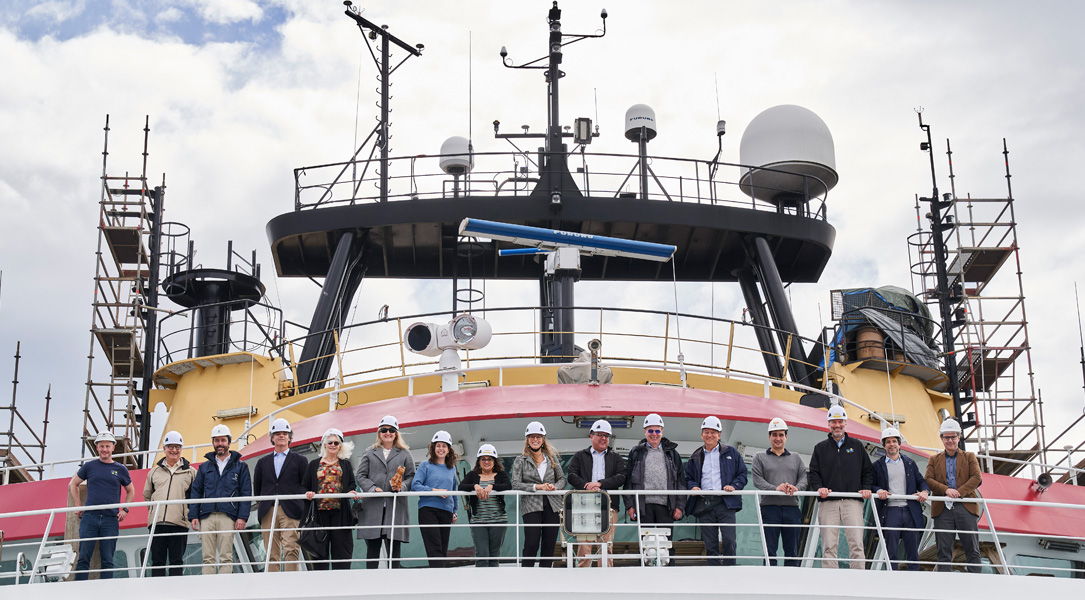 24 March, 2022 Comments Off on Advisory Board of the Schmidt Ocean Institute visits the oceanographic vessel Falkor (too) in Vigo

The advisory board of the american private non-profit foundation, dedicated to oceanographic research and exploration of the marine environment, Schmidt Ocean Institute, visited yesterday the oceanographic research vessel Falkor (too) in Vigo, Spain, and met with the directors of Construcciones Navales P. Freire, SA (Freire Shipyard). Other members of the foundation, as the Executive Director, Dr. Jyotika Virmani, and the Senior Director of Operations, Eric King, were also present during the visit, accompanied by the General Managers of Freire Shipyard, Guillermo and Marcos Freire.

The Falkor (too) has been in Vigo since April 2021, in the process of conversion, in a project led by the Freire Shipyard. Built on the basis of an offshore vessel in 2011 by Freire Shipyard, as Polar Queen, its initial purpose was to carry out inspection, maintenance and repair tasks in underwater facilities for the oil and offshore wind industries. Freire Shipyard’s current mission is, in collaboration with the Schmidt Ocean Institute, to transform this vessel into an unprecedented oceanographic research vessel for the marine research foundation.

Among the characteristics that the new Falkor (too) will acquire, its capabilities for scientific research and versatility stand out. This boat is 110 meters in length and has a capacity for 97 people.

The 960 square meters of its work deck allow the installation and deployment of different scientific systems and equipment, allowing the perfect adaptation of the ship to the scientific mission that is intended to be carried out at any given time. The ship will also have a 150-ton capacity crane with an active movement compensation system for the precise deployment of equipment and the performance of tasks on deck. It will also have a gondola where the new acoustic equipment will be housed, which will allow the mapping of the seabed and the bottom profiler to depths of 11,000 meters. The shipyard will also install new gantries for the deployment of equipment on the side (such as a CTD rosette), and on the stern (ROV, magnetometers, profilers and box corers).

Internally, more than 200 square meters will be occupied by seven different laboratories, a mission control room and conference space. The common premises will be refurbished for a better experience on board, among other ship rehabilitation works.